What are kanji radicals?

Kanji "radicals" [bushu (部首)] are a way of classifying characters for searching. Radicals are found in all kanji dictionaries, and taught in Japanese schools (see How is Japanese writing taught to Japanese children? for more on Japanese schools). A "radical" is part of the kanji which is found in more than one character. For example, the water-related kanji 汁 [soup; juice], 汚 [dirty], 泡 [bubble], and 泳 [swim] all have the same three-stroke element with the meaning "water" on the left:

There are 214 radicals. The radical system was made popular by a Chinese dictionary, the Kangxi dictionary, known in Japanese as the Kōki Jiten (康煕字典)], published in 1716.

To search for a kanji using the radical system, one first identifies the radical. It is usually either the left [Hen (偏)] or upper [Kanmuri (冠)] part of the character, or a surrounding part which is wrapped around the character [Kamae (構え)]. 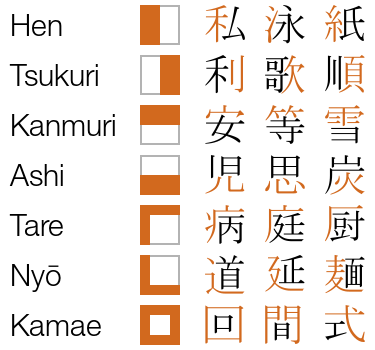 The number of kanji which correspond to a particular radical varies quite a lot. Some radicals have hundreds of corresponding kanji, and some have only a handful.

Part of kanji tests such as the Kanji Kentei (see Kanji Kentei) is testing the ability to identify kanji radicals and their names.

The sci.lang.japan FAQ also offers a lookup system via radicals.

The image from the Kangxi dictionary is courtesy of www.KangXiZiDian.com.